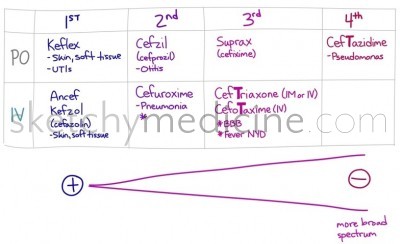 Cephalosporins work much like penicillins, inhibiting peptidoglycan cell wall synthesis in bacteria (remember those sites of action and mechanisms?)

Of course the issue is that they just keep making new cephalosporins and each generation is a little bit different in terms of its spectrum and whether it’s better at fighting Gram positive or Gram negative bacteria. Generally the newer the generation, the more broad spectrum and less Gram positive coverage. To add another layer to the confusion, there are separate oral and IV cephalosporins for each generation and all of the cephalosporins are usually recognizable by starting with “CEF-” or “KEF-” (except for Suprax and Ancef, who ever came up with those brand names didn’t get the memo)

6 thoughts on “Cephalosporins (generations and spectrum of activity)”