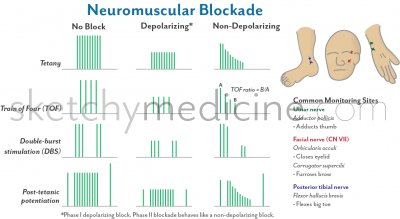 As mentioned in a previous post, neuromuscular blocking drugs are used in anesthesia to ensure paralysis during surgery. The degree of neuromuscular block is assessed using nerve stimulation, where two electrodes impose a pulse of current on a peripheral nerve (e.g., ulnar n., facial n., posterior tibial n.) and induce muscle twitches which can then be monitored through the surgery. There are a few different ways to do nerve stimulation :

Tetany: A sustained stimulation (5 s)
Train-of-four (TOF): Four pulses in rapid succession
Double-burst stimulation (DBS): A series of 3 pulses followed after a pause by 2 or 3 pulses.
Post-tetanic potentiation: When a pulse is sent after a tetanic stimulation, it will bring on a stronger twitch than at first.

With a depolarizing muscle blockade, no fade will be seen. Instead, all twitches in response to stimulation will be uniformly decreased, and there is no post-tetanic potentiation. This pattern is known as a Phase I block. But, if there is a ton of succinylcholine or the blockade is of a long duration, the pattern of response will look like a non-depolarizing block. This would be a Phase II block.

It is very hard to tell what the TOF ratio is by sight or feel alone! DBS ratio is more sensitive than TOF ratio for assessing neuromuscular block, and it’s easier to gauge by tactile evaluation than the TOF ratio. So, quantitative monitoring by electomyography (EMG), mechanomyography (MMG), or accelerometry is ideal!