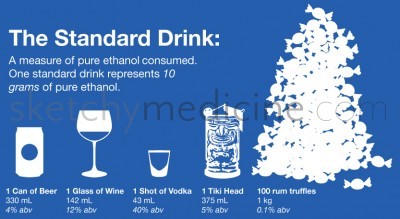 This means that based on the alcohol percentage of certain drinks, the “standard” size changes. The important thing to be aware of is to think of it as a Standard Drink because the size that equals 10 g of ethanol isn’t necessarily the standard size that is served. This is why it’s a good habit when asking “how many glasses of _______ do you drink” to ask about the size of the glass.

This design was actually originally made for an event, but I’m reposting it here because it’s useful and I like it and I haven’t had a chance to draw anything new recently. 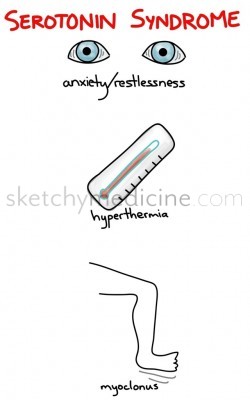 Serotonin syndrome is a serious and life-threatening reaction caused by excess serotonin in the CNS.

The biopsychosocial model for psychiatry is a way to formulate what factors are in play in an individual’s illness. It can also be used as a way to approach what aspects you need to consider when deciding on a treatment plan.

The biological factors include things such as genetics, general medical conditions and drugs (pharmacotherapy).

The social factors include a person’s living situation, their support (both family and friends), finances, situation at work/school, etc.

And because that’s a teeny weeny image, here is a lovely PDF to download and print: 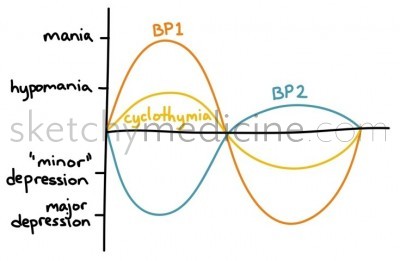 First thing’s first, it is important to understand the difference between a mood episode and a mood disorder.

The best way is to think of the episodes as the building blocks of the disorders.

Manic Episode: 1 week period of elevated or irritable mood with 4 or more of (mnemonic  GST PAID)

Hypomanic Episode: Same as manic except dialled down a notch. Only needs to be 4 days with 3 or more symptoms. People can still function and generally like being hypomanic, but their friends and family will notice a difference in them.

Mixed Episode: BOTH manic episode and major depressive episode at the same time (as in during the same day they’ll experience both depression and mania) in 1 week. 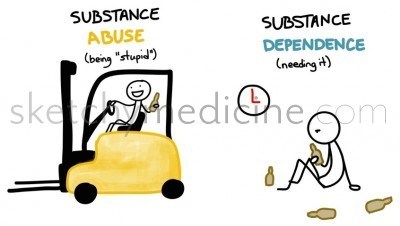 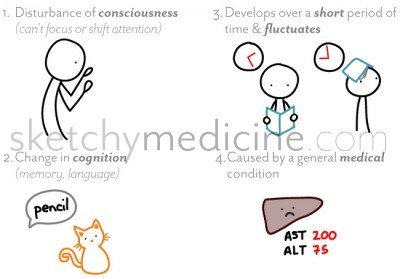 Delirium, not to be confused with dementia.

The DSM criteria for delirium:

It is important to recognize a delirium so that the underlying condition can be treated. It is also important because the delirium itself can be harmful to the patient, for example if someone who is delirious walks out into the cold with only a housecoat.

The longer one has delirium, the longer is takes to resolves, even after the underlying condition is treated.

If someone asks you to asses the level of competency of a person with delirium, it’s best to defer. Competency is both TIME- and QUESTION-dependent, so if you are asking someone when they are lucid, they could still be deemed competent, even if they are likely going to return to being delirious.

Mnemonic for delirium: I WATCH DEATH

But I want to earn the radiologist tons of money…
Only if they have: 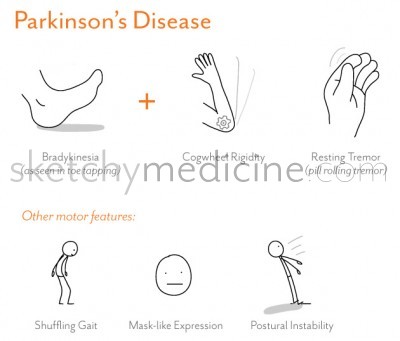 Parkinson’s Disease is a degenerative movement disorder resulting from the death of the dopaminergic neurons in the substantia nigra.

There aren’t any definitive blood tests or imaging for Parkinson’s, so it really comes down to a solid neurological examination.

The other movement signs seen in Parkinson’s

Note: my example of a non-bizarre delusion can also be classified as an idea of reference (in which you think that TV or songs are talking about you)

Many psychiatric and general medical conditions can have symptoms of psychosis and mood disorders. The way to figure them out is to look at the timeline and the onset of the psychotic vs. mood symptoms (which came first, are they always at the same time, was there something else going on) 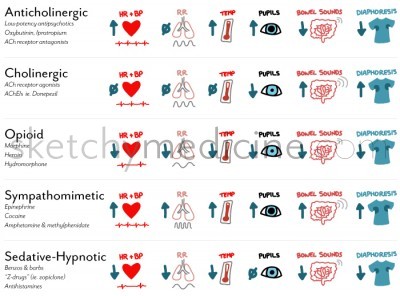 A toxidrome is a syndrome (set of symptoms) caused by specific medications or toxins.

There are 5 big ones to know: