This is not an exhaustive overview of the muscles of the arm and forearm, but it demonstrates some of the tricky relationships that often catch people up. Some of the key points of compression are also noted and the muscles are coloured per their innervation. One thing not mentioned in the doodle that is important to notice is the way that the aponeurosis of the biceps veers medially (ulnarly) this is why it is also a supinator and not just an elbow flexor. 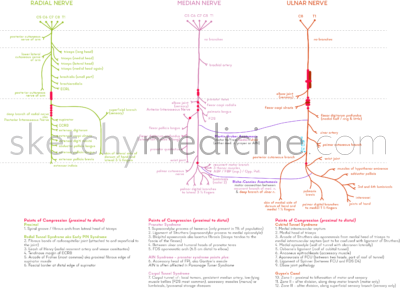 The branches of the three main terminal branches of the brachial plexus can be difficult to remember. Even worse is trying to remember where all of those pesky compression points are and why it is that you get some symptoms with some and not others.

This diagram attempts to clarify the branches of the radial, median, and ulnar nerves and where they can get squished along the way. There are of course, slight anatomic variations, but this is a good starting point. I’ve even included where the famed Martin-Gruber anastomosis and the Riche-Cannieu anastomosis are, since they can make an otherwise (totally not) straightforward examination of a median or ulnar nerve palsy more muddied since both carry motor fibers between the two nerves.

Most interestingly is John Struthers, whose namesake structures compress the median nerve as a ligament and the ulnar nerve as an arcade. 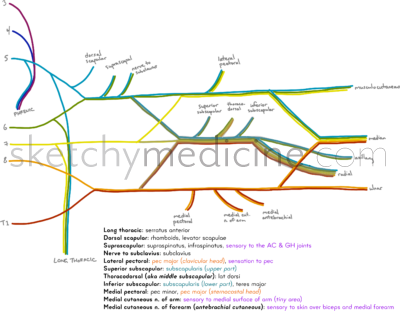 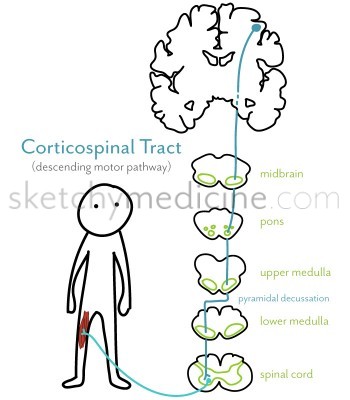 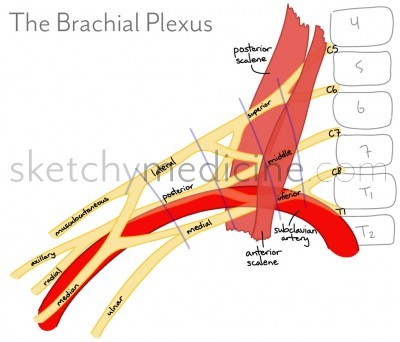 The brachial plexus is the bane of many med students’ existence during any sort of neuro block. So many nerves, so many connections, so many seemingly arbitrary names of different sections. It’s just a woven mess of misery. (especially when they start getting into the “where is the lesion” questions)

Important structures to remember because they explain why parts are named the way they are:

Vertebrae: There are 7 cervical vertebrae and 12 thoracic vertebrae. To make things confusing the cervical spinal nerves exit ABOVE their named vertebrae (except for C8) while the thoracic, lumbar and sacral exit BELOW. This messes up the whole numbering system because there are SEVEN cervical vertebrae but there are EIGHT cervical spinal nerve roots. The brachial plexus generally includes the nerve roots C5-T1*
* I say generally because there’s are anatomical variations such as a “prefixed” plexus that goes from C4-C8 and a “postfixed” plexus that goes from C6-T2

Scalene Muscles: The brachial plexus is nestled between the scalenes in the neck. At this point the plexus is oriented up and down and therefore the trunks are superior (closest to your noggin), middle, and inferior.

Subclavian Artery/Anatomical Position: The artery is in front of the plexus at the level of the trunks and then the plexus starts to wrap around it (or at least seems to because we don’t keep our arms straight out to our sides in “anatomical position” at all times). The cords are named for their relationship to the artery. One is lateral (again, if the arm was held out to the side), one is posterior and one is medial (think closest to armpit).

Subdivisions of the Brachial Plexus

The parts are: Roots/Trunks/Divisions/Cords/Branches or, as I remember them being a classy east coast Canadian: Real/Truckers/Drink/Cold/Beer

Then you might think, “But how do I remember which of the terminal branches comes off where?” For that I think of the two “M” branches being on the M: Musculocutaneous, Median and (M)Ulnar and that the whole thing together can just be said as “MARMU” Pick the mnemonics you want, the brachial plexus is rife with them. I personally just like the sound of the word marmu. 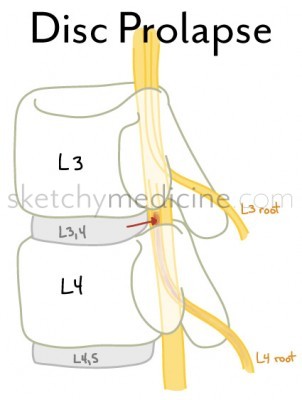 A prolapsed (slipped) disc is when the squishy innards of the disc (nucleus pulposus) bulge out past the stiffer wall of the disc (annulus fibrosis). The problem is that sometimes when this happens, the bulge can impinge the spinal cord or the spinal nerve root. This could result in an anterior cord syndrome (remember this doodle) or it could just knock out the nerve root, resulting in a specific radiculopathy (check out this doodle for where to check for numbness and weakness).

The tricky thing to remember is that though, for example, the L3 root exits at L3, if the L3,4 disc herniates, it doesn’t hit the L3 root but the L4.

The disc hits the nerve after it has branched off the spinal cord, but before it has exited the  vertebral canal. 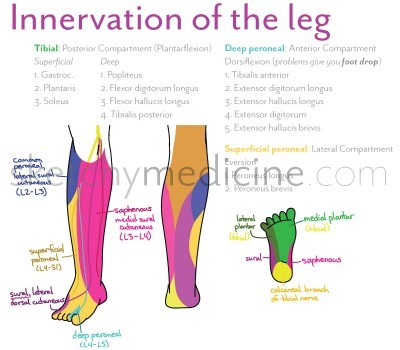 The lower leg (and especially the foot) have a pretty fancy pattern of skin innervation by the terminal branches. For example, the skin of the foot is innervated by 7 separate nerves: 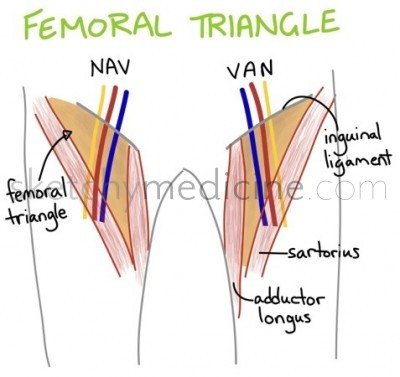 The femoral triangle is a convenient triangle where the femoral nerve, artery and vein pass from the abdomen to the leg. The best part about this is that they’re all quite superficial, making it a great place to stick things in (place catheters, nerve blocks, etc).

Because the femoral triangle is often getting poked at for various reasons, it’s important to know what’s where because you don’t want to be hitting the nerve when you meant for the artery (or vice versa).

The triangle is made up by the sartorius, adductor longus and inguinal ligament and if you just remember NAVVAN. 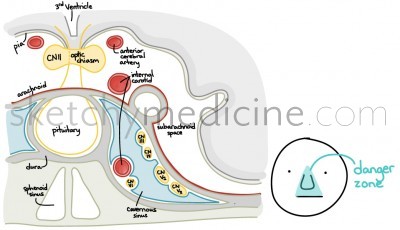 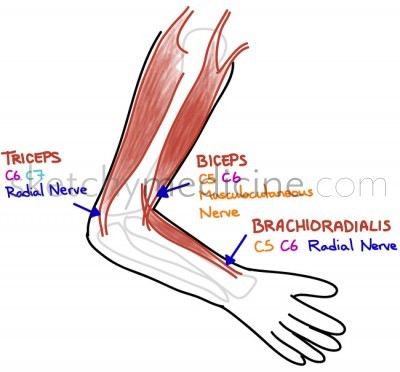 The problem is that someone comes in with weakness or numbness and you need to think, “Where in the brain/spine/nerve root/bits of brachial plexus/terminal branch is the actual problem?!”

One of the ways to help suss this out is by testing the deep tendon reflexes.

Of course you should correlate the reflex findings with the sensory findings and motor strength (remember the good old ASIA exam for testing specific nerve roots) to help determine if it is a terminal branch issue or something higher up.

And don’t forget to grade those reflexes!