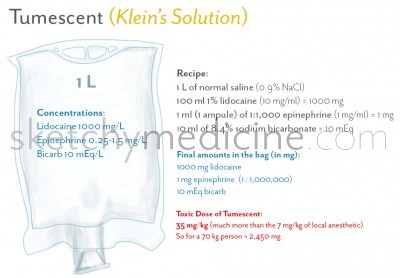 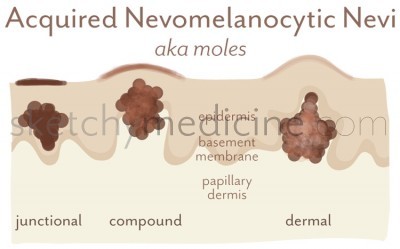 Nevi (or moles) are very, very common. They are generally well-circumscribed dark spots (or “papules” to use the dermatological terminology) that can appear at any time in someone’s life.

Histologically they are composed of groups of melanocytic nevus cells and can be found in the epidermis, dermis or both.

The problem with nevi is that they are pigmented and people tend to get worried about pigmented things on the skin (for good reason as melanoma can be a pretty scary disease). 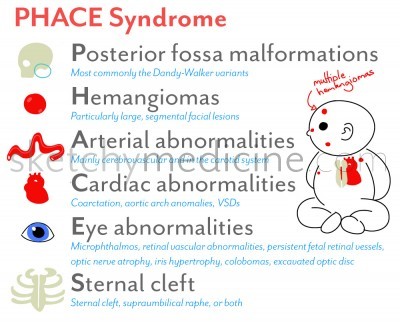 There are no shortage of congenital syndromes that are acronyms arranged into some sort of vaguely pronounceable word. There will be lots of doodles about these, but we’ll start off with a more uncommon one – PHACE Syndrome.

PHACE Syndrome is a collection of findings that go along with large infantile hemangiomas. They’re the more worrisome (but less obviously disfiguring) things you need to look for when you see a baby with a large hemangioma on the face or multiple hemangiomas.

The most common symptom of PHACE is cerebrovascular abnormalities, followed by cardiac anomalies (coarctation, aortic arch anomalies, VSDs). If you suspect PHACE, do clinical exam of the skin and eyes and MRI of the head, neck and chest. 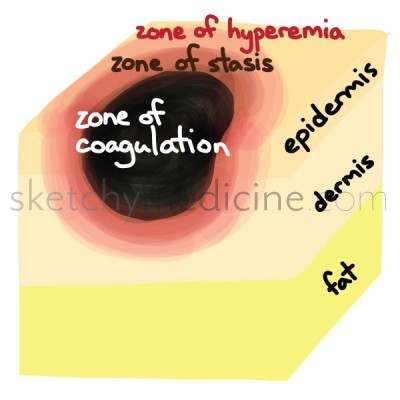 Burns are typically classified by their depth into (or through) the skin.

Zones of a Burn

A burn isn’t a homogenous spot on the skin; more heat means more damage (who knew!)

The image above shows a superficial 2nd degree burn. 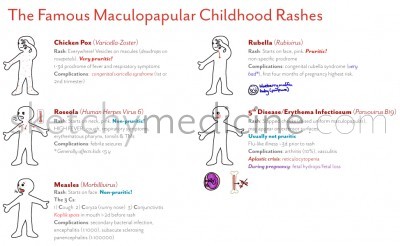 A kid without a rash just isn’t a kid.

* This is a good one to actually know the virus name! PARVOVIRUS B19

Other rash descriptors to think about 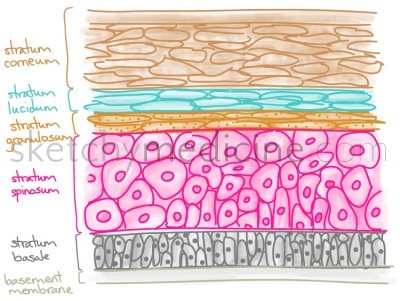 The epidermis is divided into five layers. From outside to inside (dermis). The stem cells are located in the stratum basale and migrate outwards in their differentiation process

Of note, Langerhans cells, which are specialized antigen-presenting cells are present in all layers of the epidermis but are mostly in the stratum spinosum. 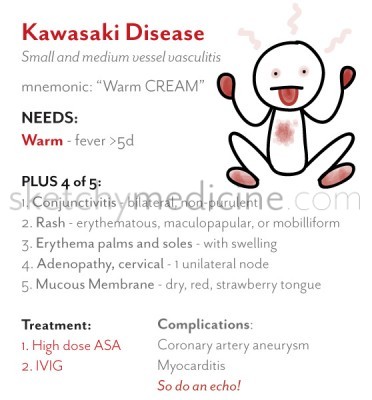 Kawasaki Disease is one of the pediatric rashes that you always need to have in the back of your mind. Most of the time the disease is self-limiting, but the consequences of not catching it are pretty bad (turns out coronary artery aneurysms often lead to things like infarction and DEATH).

Warm CREAM is an unrelated (and somewhat unpleasant) mnemonic to help remember the signs and symptoms of Kawasaki. The “warm” is a fever (one lasting more than 5d) and then you need 4/5 of the other criteria (non-purulent conjunctivitis, rash, palmar erythema/swelling, cervical adenopathy, dry and red mucous membranes, the infamous strawberry tongue). The kid doesn’t need all 4 as he or she is sitting in front of you, but the presentation and the history combined should include those criteria.

Treatment is with high doses ASA and IVIG, you do this to prevent the sequelae of coronary artery aneurysms and myocarditis, and it’s best to get an echo to check up on things. 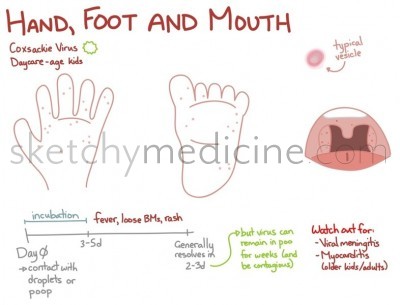 Hand, foot and mouth syndrome (or disease to all you lay people out there) is a common viral illness, most often caused by coxsackie virus. Generally it affects daycare-aged children (the 1-10ish age group), mostly under the age of 6. The big thing is the fever with a rash on, you guessed it, the palms, soles and in the mouth. Sometimes the rash can also present on the trunk or back as well. The worst part is that the vesicles in the mouth are VERY painful, so it’s not uncommon for kids to want to stop eating or drinking when they have it. 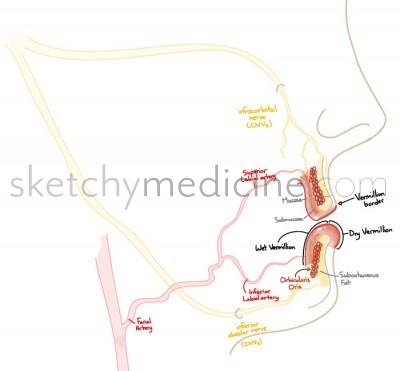 Lip lacerations are kind of a big deal when it comes to facial injuries. It’s because whether we admit it or not, they’re a very important part of the overall cosmetic appearance of the face.

So when you’re repairing lips, you need to make sure that everything lines up juuuust right. The other important considerations are that unlike fingers, you can’t just pump the lips full of local anesthetic because it will distort the anatomy, this means that a nerve block is preferred. The upper lip receives innervation from the infraorbital nerve (a branch of CNV2) and the lower lip receives innervation from the inferior alveolar nerve (more specifically the mental nerve, which originate from CNV3).

Blood supply comes from the superior and inferior labial arteries (guess which one goes to which lip), which are branches off the facial artery. 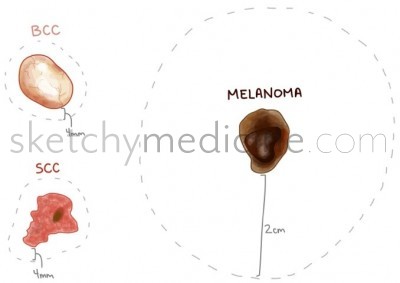 So a patient has skin cancer (duh duh duuuuh). How much of a margin should you give in your excision?

Like all things, this depends on the type of skin cancer

Melanomas: depends on the tumour (T) stage, which is dependent on tumour thickness