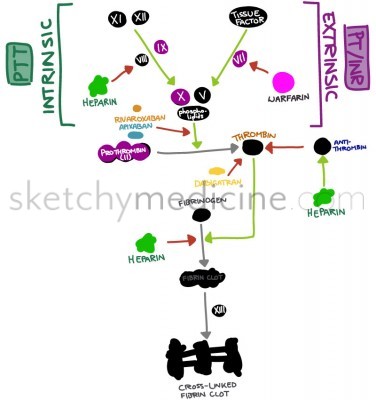 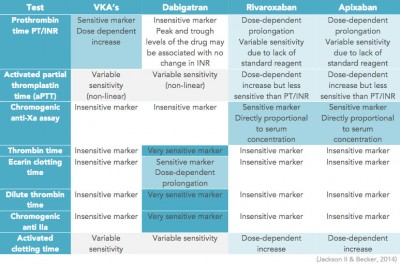 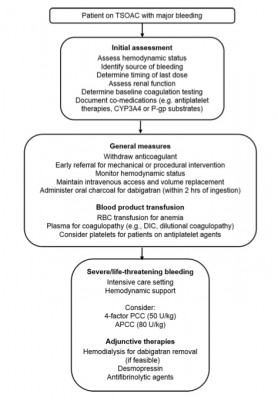 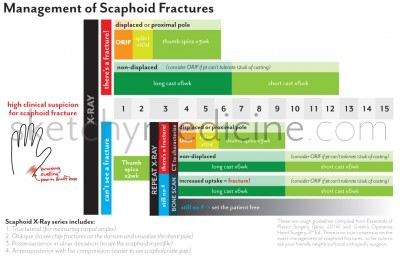 Even if you’re suspicious of a fracture but don’t see one on x-ray, that’s enough to subject someone to a cast for 2 weeks and then bring them back to re-x-ray.

This doodle goes through the basic algorithm for treating scaphoid fractures centred around a timeline to show how long the treatment course can be. There are of course nuances to the management, so take a person’s work and hobbies and handedness into consideration. Also, don’t be afraid to consult your friendly hand/wrist specialist. 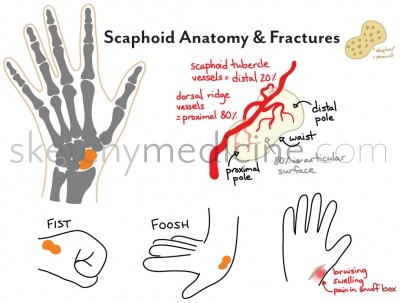 The scaphoid bone is one of the eight carpal bones of the wrist (you can check out this doodle for a refresher).

The scaphoid is the most commonly fractured carpal bone, accounting for almost 70% of fractures. It tends to be young males who break their scaphoid this is both an anatomical thing: younger kids get ligament injuries and older folks break their distal radius and a lifestyle thing: falling on outstretched hands (skateboarding, snowboarding) or throwing a punch both place a lot of force across the scaphoid leading to fractures.

The bad thing about scaphoid fractures is that the blood supply (from a branch of the radial artery) comes from distal to proximal. Since most fractures happen at the waist of the scaphoid the likelihood of having poor blood supply to the fracture site is quite high. It doesn’t help matters that around 80% of the scaphoid is articular surface (joint surface), so if it doesn’t heel well, it can lead to problems with arthritis of the wrist later on.

Scaphoid fractures present with a pretty classic story and the person is usually swollen and bruised and will have tenderness in their “snuffbox.” So even if the x-ray doesn’t show a fracture, it’s best to treat with a cast for comfort and safety and then recheck them in 2 week’s time (this will be discussed in a separate post). 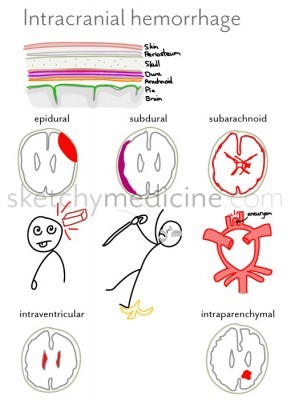 For the most part, bleeding in the brain (intracranial hemorrhage) is a pretty bad thing. Though like most things in medicine, there are varying degrees of badness, all with different mechanisms that help us sort of why we really wouldn’t want something to happen.

Intracranial hemorrhages are categorized into 5 subtypes, and are given obvious sounding names depending on where the bleed is in the brain and in relation to the layers of the meninges.

* The brain is not meaty, “parenchyma” means the functional part of the organ

The poor pia mater did not get any hemorrhage named after it, but if you want you can think of intraparenchymal as “subpial” just so it doesn’t feel left out.

The most confusing thing, and thing that likes to get asked the most on exams, is the difference between epidural and subdural hematomas.

The reason intraventricular and intraparenchymal aren’t included in the table as they each have a bunch of causes, but for both of them trauma is a potential cause as well as hypertension and stroke. It’s good to remember that premature infants are at a much higher risk of intraventricular hemorrhages.

Shock is “a syndrome resulting from failure of the cardiovascular system to maintain adequate tissue perfusion.”

Vasopressin (not actually an adrenergic drug) 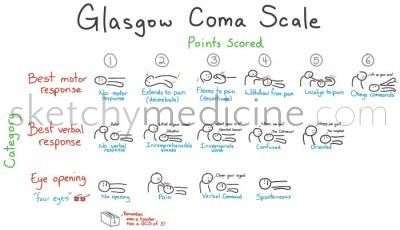 The Glasgow Coma Scale is a scoring system used to evaluate someone’s level of consciousness. It is scored out of 15 with 15 being totally awake and alert and 3 being totally not.

The important thing to remember is that the lowest score possible is 3.

Absolutely anything can score a 3, however if you are a living, breathing human being, hopefully you are scoring well up into the 10s.

Generally the GSC is applied in trauma situations and can be used as part of the decision making process of such thing things like should this patient be intubated?

Thanks to Mike for the guest doodle! 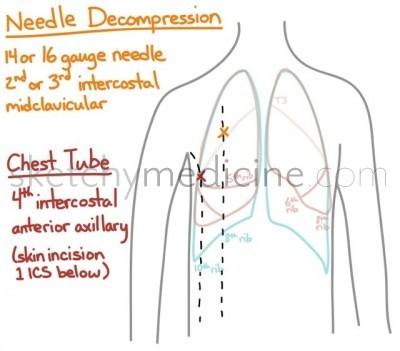 Surface anatomy of the lungs

Insert a chest tube in the 4th or 5th intercostal space in the anterior axillary line. When making the incision, make it one rib below the intercostal space you want to insert the tube into. Also, remember to go above the rib, as the neurovascular bundles travel along the underside of the ribs.

These can be done to relieve a pneumothorax, drain a malignant pleural effusion, drain a empyema, or drain a hemopneumothorax. They can also be placed post-operatively following a thoracotomy, esophagectomy or cardiac surgery.

These are used in a pinch when a patient is suspected to have a tension pneumothorax and needs immediate decompression. A 14 or 16 gauge needle is inserted above the 2nd or 3rd rib in the midclavicular line.

A tension pneumothorax is recognized by: 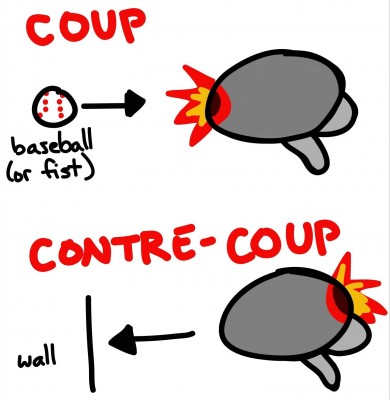 When you hit your head on something (or something hits your head) there are two typical patterns of injury. The first is the coupe where the brain injury is directly under the spot that was hit. This usually happens when your head is stationary and something moving hits it (such as someone’s fist).

The second is the contre-coupe, which happens when your head is moving and hits something stationary (such as if you fall and hit your head on the wall or the floor.